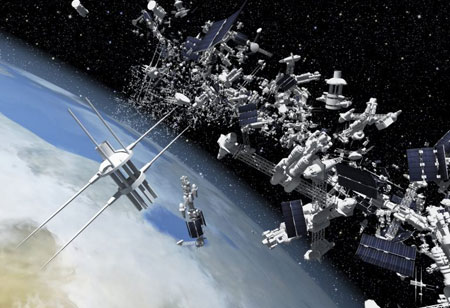 If people don't act quickly, there is the risk that space debris could lock out the possibility of future missions for a while. And if a collision creates pieces of debris, it will slam into other satellites as well and break them up, ultimately creating a debris belt around Earth.

FREMONT, CA: Because of the growing number of satellites and orbital debris in space, it called for a change at the House hearing. However, how this will be legislated is still under consideration.

Thanks to technological advancement, satellites today are smaller and more affordable in comparison to the big machines of the past. But with fleets of small satellites comes the risk of slamming into each other and high profile near misses, which is becoming more common.

Two large, defunct, and uncontrollable satellites nearly collided in orbit two weeks ago, passing about 60 feet (18 meters) from each other, narrowly avoiding a collision that could have sent thousands of pieces of "space junk" into low Earth orbit.

In late 2019, the European Space Agency had to redirect one of its satellites to reduce the risk of a collision; the other satellite operator, SpaceX, did not respond to requests to move its own machine out of the way.

Space collisions and space junks over the decades are still causing problems today. Space assets such as weather satellites, telecommunications links, and the GPS navigation system for the United States are among the vital links of space infrastructure that could be knocked out if collisions continue.

The U.S. Department of Defense has a catalog of more than 20,000 known space objects. The catalog only represents unclassified satellites or objects, and it also indicates the number of trackable objects. Some things in space are just too small to be tracked with current technology.

The House subcommittee commissioned a few experts to speak on how lawmakers can address this problem, under a provision in the 2020 NASA budget to carry out research and development activities concerning space debris mitigation and to consider a strategy for space situational awareness research and technology.

The solutions proposed were diverse, but for the most part, the experts said it would likely involve using several government entities that could include NASA, the Department of Commerce, and other possibilities. There may be some private industry involvement as well.