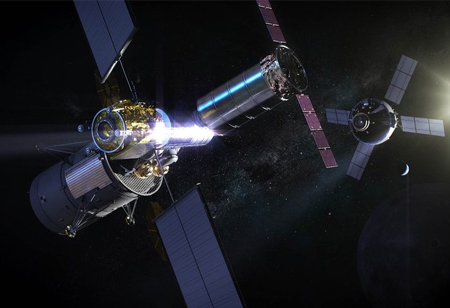 Understanding space weather and radiation environment have become high priorities, today. One payload which features a suite of instruments to monitor space weather conditions is provided by NASA and, the other, provided by the European Space Agency, will measure radiation condition there

Fremont, CA: On March 12, NASA declared that it will fly two heliophysics and space weather experiments on the lunar Gateway to gather data to help future human missions to the moon and beyond.

The payloads can be considered as the first science experiments to fly on the lunar Gateway, a human-tended facility NASA intends to assemble in a near-rectilinear halo orbit around the moon. The Gateway will primarily be used as a staging area for human missions on the lunar surface, but NASA also plans to use it as a platform for science experiments, including those that can operate even when no one is on board.

One payload which features a suite of instruments to monitor space weather conditions is provided by NASA. The other, provided by the European Space Agency, will measure radiation condition there. Understanding space weather and radiation environment have become high priorities.

“Working with our international partners, asking them what their priorities were to fly at Gateway, we began to notice a few common themes,” stated Jacob Bleacher, chief exploration scientist at NASA’s Human Exploration and Operations Mission Directorate, during a meeting of the NASA Advisory Council’s science committee.

Bleacher thinks these two payloads complement each other in their ability to more completely characterize the space radiation environment around the moon.

The NASA payload is designed to use those with high technology readiness levels (TRLs) as well as which can be assembled quickly. Jamie Favors, a program executive in NASA’s heliophysics division, stated at the science committee meeting, “These are high-TRL instruments. They have a lot of flight heritage. Some of these will be able to be pulled off the shelf and be ready to go very quickly.”

NASA has not yet disclosed the specific schedule for payload development. The Power and Propulsion Element, the first Gateway module, is scheduled to be launched in late 2022.

Nicola Fox, director of NASA’s heliophysics division, said, “We understand that this is an incredibly optimistic schedule and it is success oriented. We’re taking risk on our ability to deliver the instrument but we would not take any risk on what we would actually put on the Gateway.”

In the announcement, NASA emphasized that the payloads will support future Artemis crewed missions to the moon as well as later human expeditions to Mars.