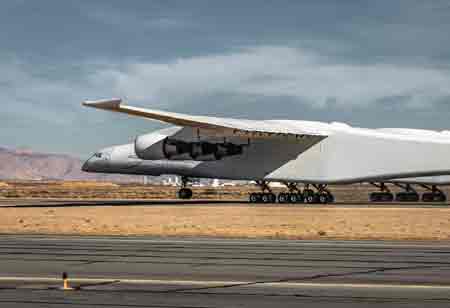 The announcement was made in a March 4 presentation by Mark Bitterman, the Vice-President for government relations and business development at Stratolaunch at the Next-Generation Suborbital Researchers Conference. In the announcement, it was said that the company's one-of-a-kind plane would start flying again in September. "We are working to get certified by the FAA, so beginning in September we'll fly at least once a month," he said. The tests would last for eight months to get the plane certified by the FAA.

In April 2009, the Stratolaunch plane flew a test flight from Mojave Air and Space Port in California. The operation lasted for two and a half hours. The flight testing went well, but officials did not disclose any details about its future plans. In October, the company announced that it had transitioned its ownership from Vulcan, Allen Paul's holding company to an unnamed organization, which later was found to be Cerberus Capital Management.

Stratolaunch no longer calls itself a launch company, said Bitterman, "We considered ourselves a space launch company under the previous Stratolaunch. In-fact we are something very different now." The new focus is on supporting high-speed flight testing like hypersonics work, which the company is interested in. "Our business plan is built around the operation of a fleet of vehicles with both government and industry customers," he said. "What we're looking at essentially are customizable, reusable and affordable rocket-powered testbed vehicles, and associated flight services."