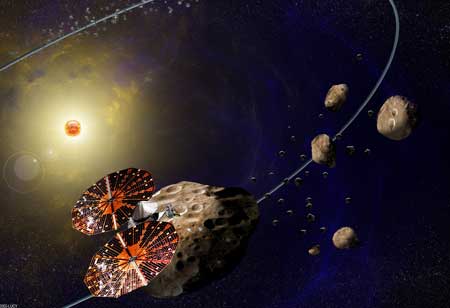 Every project will be given $3 million for completing Phase A concept studies in nine months. NASA will select two of the missions, i.e. missions to Venus and two outer solar system moons, for development in 2021

FREMONT, CA: NASA, for its Discovery line of planetary science missions, has announced the name of four selected finalists for the next round of the program. The finalists were selected from an unspecified number of proposals submitted last summer. Every project will be given $3 million for completing Phase A concept studies in nine months. NASA will select two of the missions, i.e. missions to Venus and two outer solar system moons, for the development in 2021.

"These selected missions have the potential to transform our understanding of some of the solar system's most active and complex worlds," said Thomas Zurbuchen, associate administrator for science at NASA, in an agency statement about the selections.

Out of the four, two finalists would go to Venus which was last visited by NASA in a dedicated mission carried by the Magellan orbiter in the early 1990s. The present mission includes an orbiter and a probe that would descend through the Venus' dense atmosphere to measure its composition and chemistry. Radio Science, Venus Emissivity, InSAR, Spectroscopy, and Topography, or VERITAS, is an orbiter that would link infrared emissions from the surface to geological features and map the surface using synthetic aperture radar.

Apart from the Venus mission, the other two missions seek to study moons in the outer solar systems. A series of close flybys will be performed to monitor the volcanic activity by Io Volcano Observer (IVO), the innermost of Jupiter's four large moons and the most volcanically active body in the solar system. Triton, Neptune' largest moon which has plumes erupting from its surface that could be linked to a subsurface ocean would observe a single close flyby by Trident.