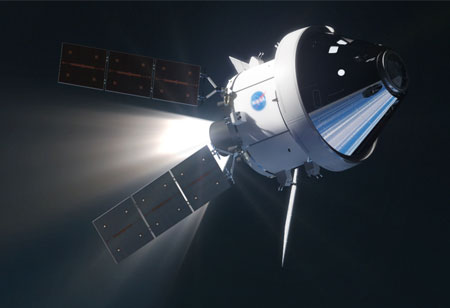 Lockheed Martin was first selected by NASA in 2006 to develop the Orion spacecraft as part of the Constellation Moon program launched by President George W. Bush.

FREMONT, CA: NASA has placed an order of six reusable Orion Crew Capsules from Lockheed Martin for a cost of USD 4.6 billion, which will be used to fly astronauts to the vicinity of the Moon in the 2020s. The agency also announced that the final order might reach a total of twelve Orion Crew Capsules by the year 2030.

NASA's Artemis program aims to return astronauts to the Lunar surface by the year 2024, a deadline set by the Trump Administration. Under the Orion Production and Operations Contract (OPOC), a production line will be set up for Orion Spacecrafts to support the Artemis program. With the help of the Orion vehicles, astronauts will be ferried to a mini space station, or gateway, in orbit around the Moon. From there, they will be transferred to a different spacecraft which shall take them to the lunar surface. Once the surface mission is completed, they shall return to the space station, where they will be transferred back to their Orion Capsules, and return to Earth for splashdown at sea.

"This contract secures Orion production through the next decade, demonstrating NASA’s commitment to establishing a sustainable presence at the Moon to bring back new knowledge and prepare for sending astronauts to Mars. Orion is a highly-capable, state-of-the-art spacecraft, designed specifically for deep space missions with astronauts, and an integral part of NASA’s infrastructure for Artemis missions and future exploration of the solar system,” said NASA Administrator Jim Bridenstine in a statement

Lockheed Martin was first selected by NASA in 2006 to develop the Orion spacecraft as part of the Constellation Moon program launched by President George W. Bush. Later the Orion spacecraft was diverted to the new deep space exploration missions under the Obama administration, which focused on HUman missions to Mars.

"The company’s new contract with NASA will include crew modules, complete launch abort systems, and adapters to connect the Orion crew modules with their European-made service modules. The contract also covers parts of the European service modules procured by Lockheed Martin, such as auxiliary rocket engines and network interface cards," said Mike Hawes, Orion Program Manager at Lockheed Martin. He believes the purchase of Orion Capsules in groups of three allows Lockheed Martin and its subcontractors to achieve production efficiencies and cost savings.