The recent large-scale natural disasters are a testament to the fact that disasters do not stop for a virus. While efforts are underway to recognise and forecast the outrage of such catastrophes before their occurrence, unmanned aerial vehicles or drones play a pivotal role in bolstering disaster resilience. Take, for instance, the outbreak of forest fires, where virtually in no time, acres of land turn into ashes. In such dire circumstances, technologically advanced unmanned aerial systems can provide firefighters with real-time information about the exact fire location and range of spread. While investments in unmanned aerial vehicles is increasing rapidly, the challenges remain. Be it achieving lower operational costs, simplicity, versatility, ease of use, or efficiency, development and application of such systems demands engineering expertise and talent to meet the specific requirements of a project.

If there is one organisation that truly warrants credit for the advancement of novel convertible UAV / UAS concept, it is UAV Works. From aircraft for air training, and vigilance and security to surface mapping, and messaging and courier transport, UAV Works meets a plethora of requirements with its comprehensive solutions and services in this space.

An appropriate example of how drones are becoming the eye-in-thesky for firefighters is the Ethon Project, an initiative founded by the Valencian Innovation Agency, in which UAV Works worked alongside eminent organisations like the Polytechnic Valencian University and companies such as ETRA and PYRO. UAV Works conducted the experiment for eight long months using its state-of-the-art unmanned vehicle–VALAQ-120.

Owing to its broad range of coverage, VALAQ-120 accurately dropped sensors at different locations across the widespread forest. Real-time data collected by the sensors was sent to the ground station to analyse and map hot spots where conflagration could either start or intensify. It also optimised firefighters’ extinguishing tasks by revealing areas where re-ignition of fire could most likely happen. Credits to VTOL capacity and VALAQ’s long flying time, UAV Works and its partners successfully developed a firefighting information management system with an advanced command post.

Backed by sheer talent and rich engineering experience and expertise, UAV Works acknowledges the rapid growth of the UAV market and is committed to exploring this uncharted territory. Having worked in the aeronautical engineering space for a considerable time, the company infused its ingrained knowledge to develop a convertible aerial platform. “We always wanted to work in the middle of the unmanned device market. Initially, before UAV Works was founded, we provided services using our own systems,” says Salva Puig, founder of UAV Works. He adds, “Upon scrutinising the bottlenecks of convertible unmanned systems, we felt the need to develop a model ourselves.”
Today, UAV Works has successfully designed, manufactured, and tested an aircraft–VALAQ-120– based on the convertible UAV/UAS concept and has even embedded VTOL features in it.

Hence, what was thought to be an intricate design to carry out was skillfully crafted by UAV Works’ proficient team. To eradicate complexities related to convertible systems’ precision and stability, the company carefully studied the parameters affecting flight envelope during the transition from multicopter to airplane mode and vice versa. UAV Works developed its own unique control software that guarantees stable flight in most critical situations. Besides, the robust aerial solution offers extraordinary versatility, efficiency, more autonomy, and greater functionality.

With complete solutions oriented to courier delivery, mapping, and surveillance with UAS systems and a UAV fleet managed through 3G/4G mobile networks, VALAQPatrol makes multi-tasking possible for UAV Works. At the core, VALAQ Patrol is an unmanned aerial tool ideally suited for long-range and autonomy security, surveillance and emergency operations. A combination of efficiency, flight time and capabilities, VALAQPatrol comes with a full carbon fibre structure and motor pylons in V inverted quadcopter configuration. The aerial device has an electric four-engine flying wing (wingspan of 1220mm) set in a non-linear, trapezoidal arrangement that attributes to its VTOL characteristics. VTOL features allow vertical take-off and landing in VALAQ– eliminating the need to have a catapult or net to land drones by crashing them to the ground. Meaning, VALAQ’s 3 points are always in-contact with automatic retractable gear that guarantees smooth landing. Also, the perfect combination of vertical take-off and horizontal landing increases the operational time of VALAQ–up to 50 (40 guaranteed) minutes of continuous flight with the payload onboard and an MTOW of 4.1kg. To that end, the completely autonomous, low-weight VALAQPatrol consumes up to four times less power than the equivalent multi-rotor per mission.

In addition to this convertible concept, UAV Works also extends its breadth of expertise to design custom RPA or UAV aircraft. Having worked as AESA manufacturers and RPA air operators, the Valencia-based company blends its extensive expertise to turn customers’ ideas into reality. The firsthand experience of UAV Works in designing manned aviation projects gives them an edge to help its customers with any engineering challenge raging from wind tunnel to fluid simulation to test benches and more. The company also covers regulated pilot training based on OACI and EASA standards as a part of its comprehensive services. To summarise, UAV Works is the one-stop-shop in the vast unmanned aerial paradigm.

With innovation, unparalleled expertise and talent at its core, UAV Works is well positioned in this rapidly growing market. The company is working continuously to enhance the capabilities of its solutions further. Moving forward, UAV Works will mark a unique trail in UAV/UAS innovation, and assist its customers in achieving their goals in the most seamless manner possible. 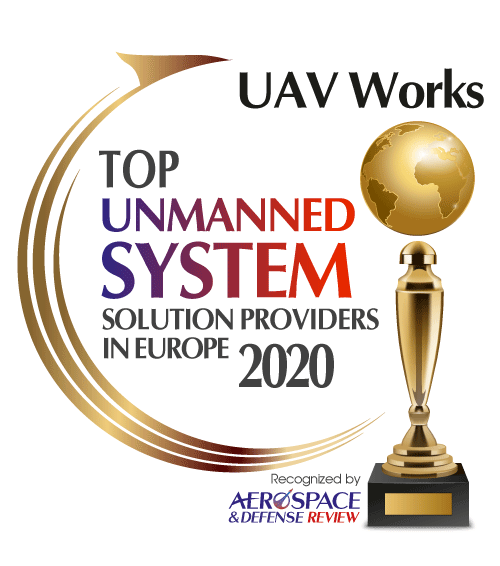 Description
UAV Works specialises in innovation, research, and development in the field of aeronautical engineering. As a company born from talent and experience, the philosophy of UAV Works is to make its projects the epitomes of excellence. The company bases its foundation on the convertible UAV/UAS concept with VTOL features that offers great autonomy, functionality, and versatility to the customers. With its unique aircraft platform, UAV Works offers comprehensive solutions oriented to courier messaging, mapping, and surveillance. It leverages robust UAS systems and UAV fleet managed through 3G/4G mobile networks 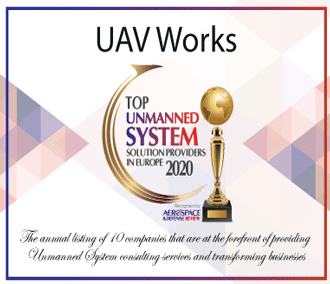 "We always wanted to work in the middle of the unmanned device market. Initially, before UAV Works was founded, we provided services using our own systems"