Tina Sjogren, CEO Tom Sjogren, CTO
While space adventure movies like Star Trek and Star Wars have already given us a glimpse of humans as spacefaring species, we can now truly see the marvel humans can achieve in terms of space travel. Today, the space race is turning hyper-competitive, with technology leaders working to realize 10-minute space vacations, space hotels, and the colonization of Mars—ideas previously considered sci-fi. But reaching newer milestones will take the combined effort of many leading and innovative companies specializing in different space exploration facets like launching, propulsion, and landing systems. One such company accelerating the ongoing space race is Pythom—a finalist in DARPA Launch Challenge 2019. Pythom focuses on bringing down the high cost of space launches and democratizing it through novel designs and cost-effective production. 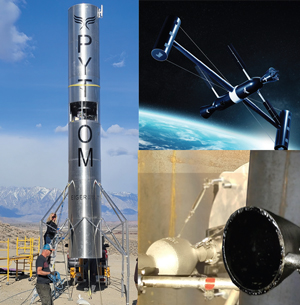 “We manufacture space transportation systems, write control software, and test components in-house with our highly motivated workforce backed by strong leadership and an extended team of aerospace specialists,” says Tina Sjogren, co-founder and CEO of Pythom. Pythom uses computer-aided design, analysis, and manufacturing tools to achieve the most lightweight and efficient spacecraft possible. Further positioning Pythom as a competent space tech company is its past technological capabilities. Back when communication tools used in the extreme wilderness were bulky in size, firms required heavy equipment to haul them onto trucks before setting them up with a lengthy and cumbersome process. Pythom founders developed a software and hardware solution package that fit inside a Pelican case to eliminate the cumbersome transportation process of such bulky communication tools. Named Contact, it was featured on the front page of the Circuit in the New York Times for its success. This shows how technical and creative the Pythom team can be. Notably, the innovative communication device attracted customers ranging from climbers to the military, NGOs, and even NASA. The Pythom team is now transferring this methodology and design thinking to space tech. In doing so, Pythom ensures it abides by all guidelines and regulations set by the Federal Aviation Administration (FAA) and other local norms.

It comes with renewable biomass fuel, a modular design that allows the launch system to be assembled virtually anywhere, and non-cryogenic, storable propellants that don’t need cryogenic storage. Interestingly, the Eiger launch system is the very design concept that helped Pythom secure its position as one of the ten finalists of the DARPA Launch Project.

With such competencies, Pythom is now transferring the base technology of Eiger to an entire fleet encompassing rockets, spacecraft, and landers to offer a unified and integrated solution. “Pythom is mission-oriented, not technology-oriented. We are building an infrastructure transportation system that will make space access easy, highly responsive, and profitable, which is an innovation in itself for us,” states Tom Sjogren, co-founder and CTO of Pythom. 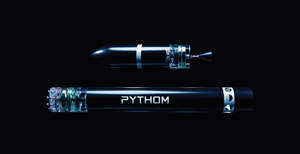 Concurrently, the company’s Spaceship offering is based on Pythom’s proprietary mathematical modeling. The solution allows astronauts to manipulate artificial gravity in silos and create different space environments to acclimatize astronauts. Astronauts can even carry the Olympus Lander on the Pythom Spaceship. Once in orbit, Olympus Lander detaches from the spaceship and lands on a planet, a moon, or an asteroid. Olympus is designed to ferry humans and provisions, significantly simplifying the process of returning explorers to the spaceship. Both Olympus Lander and Pythom Spaceship use the same propellants and propulsion system as Eiger to launch from Earth, travel in space, and ascend/descend on other celestial bodies.

Apart from its emphasis on the performance and functionalities of its integrated space transportation system, Pythom also has a laser focus on sustainability. In Tom’s and Tina’s words, even though the total amount of launch activities and their negative effect on the environment is small, most rockets release 15 kg to 35 kg of CO2 into the atmosphere for every kg of payload; and with increased space ventures in the next 5 to 10 years, the total CO2 emission from space missions can create a severe environmental impact for the planet. To steer away from such a future, Pythom has developed its proprietary Black Magic propulsion system that uses 100 percent renewable biomass fuel (waste products of corncobs). The produced carbon dioxide can then be absorbed by a new batch of corn, essentially dialing down the net carbon emission to zero.

The Next Step: Taking Humans to Space

As the founders of Pythom highlight, what drives the company is the possibility for civilians to travel to space and other planets. “Our dream, vision, and master goal have always been the realization of human interplanetary space travel. Not in big spaceships but early exploration style, light, and fast vessels,” adds Tom. “As an example, one can look at how Norwegian explorer Roald Amundsen conquered the famous Northwest Passage (the sea route between the Atlantic and Pacific oceans through the Arctic Ocean) on a fishing boat even when naval ships failed to accomplish the same task. That’s the approach we believe in.” Pythom will continue doubling down on this vision in the coming months.

At present, Pythom is changing from prototyping to flight-ready manufacturing. “What we build now will fly to space within a year,” states Tina. On this note, Pythom expects its flight-ready propellant tanks, propulsion systems, avionics, and attitude control systems to be ready by Q3 2022. The first launch will go to the edge of space (Karman line) within 12 months, and the launch to orbit will follow soon. With these visions, Pythom is all set to play a catalytic role in space flight and help human society take a giant leap forward as spacefaring species. 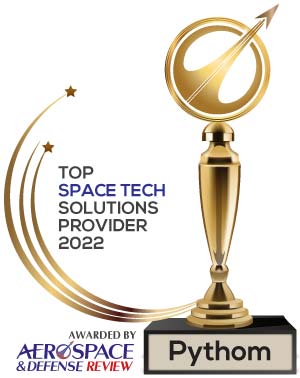 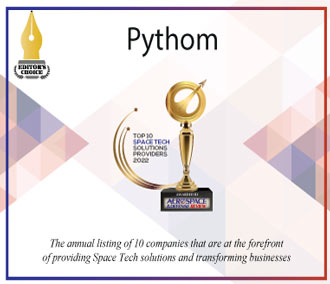