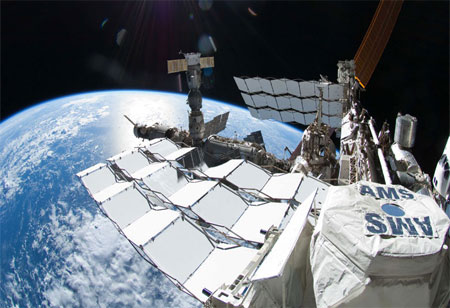 NASA astronaut Andrew Morgan and ESA astronaut Luca Parmitano carried two spacewalks and have successfully installed a coolant pump for the AMS, one more is required to finish the complex repair effort

Fremont, CA: After completing a series of spacewalks on Dec 2 to repair the Alpha Magnetic Spectrometer (AMS), which is mounted together with the station's instrument, NASA is finding ways to put in another AMS spacewalk, before the station's crew gets reduced to three in February.

The previous spacewalks were carried out by NASA astronaut Andrew Morgan and ESA astronaut Luca Parmitano, which was the third in a series to repair the AMS. While the two astronauts have successfully installed a coolant pump for the AMS, one more is required to finish the complex repair effort.

Though NASA hasn't set any date for the final AMS spacewalk, it is unlikely to take place this month due to a busy schedule of visiting vehicles. During a Dec.3 press conference about the forthcoming Dragon cargo mission, Kenny Todd, NASA ISS operations integration manager said: "the fourth EVA was something we were going to have to find a home for, and we're still in that position".

The Dragon mission, which was initially scheduled on Dec 4, was scrubbed due to winds was re-scheduled and launched on Dec 5 this year. This is just the first of the three spacecraft listed to visit the station this month. Russia is scheduled to launch a Progress cargo spacecraft on Dec 6 and Boeing's CST-100 Starliner is scheduled to launch on Dec 19 In an emergency, if that date holds for Starliner, it would dock with the station on Dec 20 and remain there for around five days.

That makes it doubtful that final AMS spacewalk will take place this month. "We'll be looking to do that probably sometime after the first of the year, unless between now and then a window opens up," Todd said.

Todd said that NASA is unlikely to carry out a spacewalk with only three-person crew except in emergency situation. He later added that there might be an opportunity to carry out a spacewalk in April, during the "handover" stage after the arrival of NASA astronaut Chris Cassidy and Russian cosmonauts Nikolai Tikhonov and Andrei Babkin, making the strength of the crew to six for a short time.

Though there is no danger to the instrument if NASA runs out of time before completing the repair work, only if the battery replacements are done in time. The AMS was turned off for cooling pump replacements and can remain dormant for months.