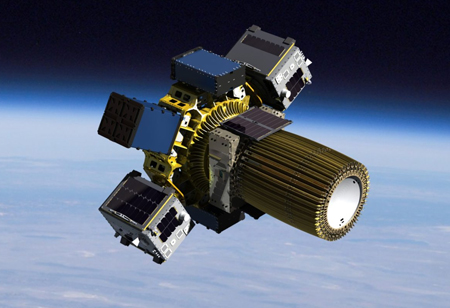 “If we previously had been focused on the Earth-to-orbit part of the equation, Sherpa lets us tackle the next stage, which is Earth orbit to anywhere in cislunar space,” Bonin commented in an interview.

Fremont, CA: Small satellite rideshare organizer Spaceflight is getting ready to launch a series of progressively upgraded Sherpa orbital transfer vehicles that would act as smallsat deployers, space tugs as well as platforms for hosted payloads.

The first vehicle, designated Sherpa-FX, is slated to launch no earlier than December on a SpaceX Falcon 9 rideshare mission. Sherpa-FX would carry 16 spacecraft for customers including NASA, the University of South Florida, and startups Loft Orbital, HawkEye 360, Astrocast, and iQPS Inc.

Grant Bonin, Spaceflight senior vice president of business development, stated that the company has “at least three” more Sherpa vehicles taking off next year as the company expands into the more crowded in-space transportation market.

“If we previously had been focused on the Earth-to-orbit part of the equation, Sherpa lets us tackle the next stage, which is Earth orbit to anywhere in cislunar space,” Bonin commented in an interview.

Spaceflight is one of the multiple companies developing orbital transfer vehicles to speed satellites to their target destination after launch. Startups Momentus, Firefly Aerospace, D-Orbit, and Exotrail are also developing orbital transfer vehicles, which aim to bridge the gap between dedicated smallsat launchers and heavy-lift rockets that carry smallsats as secondary payloads. Sherpa-FX builds off the lessons Spaceflight learned in 2018 with its SSO-A launch when it herded 64 smallsats onto a Falcon 9 rocket.

While successful, that launch was challenging to arrange due to constantly changing customer readiness levels, and later became a space situational awareness dilemma when operators had difficulty finding their spacecraft after separation from Falcon 9’s upper stage.

“The missions that we are doing next year will demonstrate longevity approaching oone year, and our requirements envelop missions that are three years and beyond,” he continued. “Longer term, our ambitions are the inner solar system.”