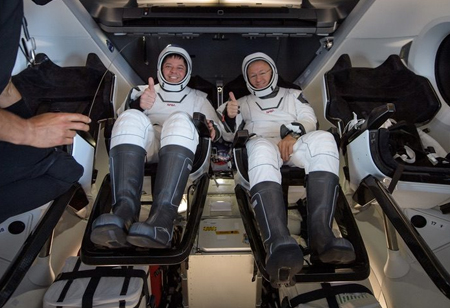 The Crew Dragon spacecraft built by SpaceX is the first American made spacecraft to complete a space mission in over a decade.

"I personally expected there to be more, certainly not issues with the vehicle, but some challenges or some things that were maybe not quite what we expected," Hurley

said, based on his experience flying on space shuttle missions. "The mission went just like the simulators. Honestly, from start to finish, all the way, there were no surprises."

Hurley stated an example during reentry when he expected the spacecraft's altitude control to deviate from the plan due to the denser lower atmosphere shortly before parachute deployment. "I fully expected that to happen, and it did not," he said. "The vehicle was rock solid." Behnken was more descriptive of the reentry into the atmosphere and painted a more vivid picture. "Once we descended a little bit into the atmosphere, Dragon really came alive," he said, firing thrusters to maintain the proper attitude during reentry.

The initial plan for the Demo-2 mission was for a short test flight, wherein the astronauts would spend a few days at the ISS. However, for two months, NASA extended the mission so that Hurley and Behnken could help support station operations at the ISS as there were only three astronauts present on board. According to Hurley, the extended mission had an added benefit of testing the spacecraft thoroughly.

"As we descended through the atmosphere, the thrusters were firing almost