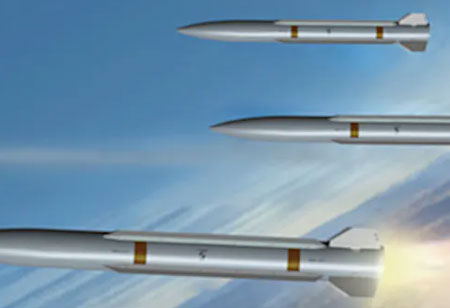 Raytheon insisted that with the use of military off the shelf components, additive manufacturing, and ready to use parts, the missile can offer an affordable solution to countering current and emerging airborne threats.

The weapon shall employ a configuration similar to the one used in SIM-2 Standard fleet defense missile, having long strakes amidships and cruciform tailfins. The missile will be six feet in length and is expected to weigh one hundred fifty pounds, half of the existing AIM-120 Advanced Medium Range Air to Air Missile (AMRAAM).

Raytheon insisted that with the use of military off the shelf components, additive manufacturing, and ready to use parts, the missile can offer an affordable solution to countering current and emerging airborne threats. "Peregrine will allow U.S. and allied fighter pilots to carry more missiles into battle to maintain air dominance. With its advanced sensor, guidance and propulsion systems packed into a much smaller airframe, this new weapon represents a significant leap forward in air-to-air missile development," said Dr. Thomas Bussing, Raytheon Advanced Missile Systems vice president.

The new Peregrine missile, aimed at strengthening capabilities of current fighter aircraft, is faster and more maneuverable than legacy medium-range air to air missiles and also doubles the payload on a variety of fighter platforms. The sophisticated and miniaturized guidance system in the missile can detect and track targets at any time of the day, under any weather conditions.

The company stated that the Peregrine missile was developed mostly using internal research and development funds, and is not in response to any formal or stated U.S. military service requirement and program. The newly developed missile will be to strengthen current fighter aircraft capabilities and to complement the AMRAAM and AIM-9X, rather than replace them. "The company has taken the technologies from the AIM-120 AMRAAM and the AIM-9 X Sidewinder and combined them into the Peregrine. It can do everything from short-range to beyond-visual-range to beyond-medium-range," said Mark Noyes, business development executive for Raytheon's air warfare systems.

Currently, in its development stage, the Peregrine offers potentially a better range than the AIM-120, is faster and more maneuverable than legacy medium-range air to air missiles such as AMRAAM, thanks to the use of what Raytheon described as a new, high-performance propulsion sector.