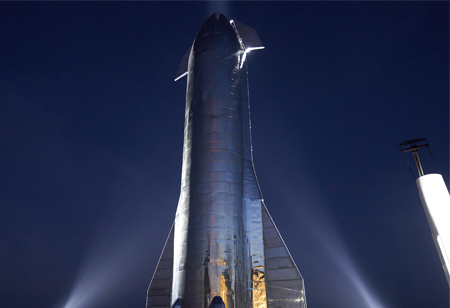 On June 1, there were temporary flight restrictions for the airspace above the test site, restricting airspace up to an altitude of 26,000 feet. Flight restrictions have also been in place in the past for static fire tests, but for much lower altitudes

Fremont, CA: The Federal Aviation Administration (FAA) issued a license to SpaceX, allowing the company to carry put suborbital flight tests for the next generation of its Starship launch vehicles. The FAA's Office of Commercial Space Transportation published the launch license on May 28 for what it has termed as the Starship Prototype Launch Vehicle. With this license, SpaceX can conduct suborbital flights of the vehicle from its test facility in Boca Chica, Texas, near Brownsville.

The company has already conducted a series of static fire tests of the latest Starship prototype called the SN4, including one on May 28. SpaceX is yet to formally announce when it will attempt the initial hop test for the vehicle. On June 1, there were temporary flight restrictions for the airspace above the test site, restricting airspace up to an altitude of 26,000 feet. Flight restrictions have also been in place in the past for static fire tests, but for much lower altitudes.

Any flight test of Starship would require either a launch license or a less restrictive experimental permit from the FAA. A previous prototype vehicle, Starhopper, had a license from the FAA, which allowed it to carry out a single flight in August 2019 to an altitude of about 150 meters, landing on a nearby pad at the Boca Chica site about a minute after liftoff. However, the conditions for that permit limited SpaceX to just a single Starhopper flight to that altitude.

In contrast, the launch license for Starship places no overt restrictions on the number of flights or their altitude, beyond being suborbital flights that both take off and land at Boca Chica. The license also states that the vehicle must follow the ground track and trajectory presented in the license application, which, however, along with the application, remains undisclosed.

At an event in September 2019 unveiling an earlier prototype of the Starship, SpaceX founder Elon Musk stated that he did not envision difficulties getting the FAA license despite the months of work needed to amend the Starhopper permit to allow just a single 150-meter hop. “I feel pretty optimistic about things. I don’t see any fundamental obstacles,” he said. The event unveiled the Starship Mark 1 vehicle, which the company claimed would take off soon. The Mark 1 vehicle, however, was destroyed in a tank pressurization test in November, similar to the fate of the SN1, SN2, and SN3 that followed.