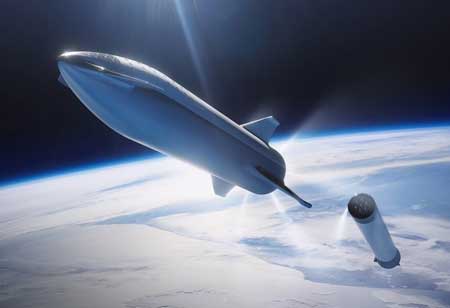 It's not yet clear if all of the 182 Starlink satellites will be part of the constellation which the company expects to begin service with later this year. According to reports, about 10 of the satellites launched in May last year never reached their final operational orbit.

FREMONT, CA: With the launch of 60 of its own Starlink satellites on the Falcon 9 rocket on January 6, SpaceX became the operator of the world's largest commercial satellite constellation. The Falcon 9 rocket lifted off from Cape Canaveral, Florida, marking SpaceX's first launch of the year. Built to provide high-speed 5g internet, the company's 60 Starlink satellites separated from the rocket’s upper stage about an hour later. Currently, SpaceX has launched these satellites into a 290-kilometer orbit, where the company will perform a routine of final checks before raising them to the proposed 550-kilometer orbit.

SpaceX's fairing catcher ship Ms. Tree was unable to recover a fairing half after the launch. The rocket's first stage landed on the drone ship, Of Course I Still Love You in the Atlantic Ocean, completing its fourth mission. In May 2019, SpaceX had used the same booster to launch the first 60 Starlink satellites to Low Earth Orbit. The company has now launched a total of 182 satellites in the Starlink Constellation, including two prototypes that the company had orbited nearly two years ago.

It's not yet clear if all of the 182 Starlink satellites will be part of the constellation which the company expects to begin service with later this year. According to reports, about 10 of the satellites launched in May last year never reached their final operational orbit. In July last year, the company had released a statement that said that three of the Starlink satellites had failed shortly after launch, and another two healthy satellites would be deorbited as practice. However, the company did not respond to queries on why ten satellites failed to reach their operational orbit instead of 5.

Regardless of the number, SpaceX now holds the record for the largest commercial satellite constellation. SpaceX will be deploying 1,584 satellites at the 550-kilometer orbit to accelerate service rollout and reduce the risk of creating orbital debris. At this altitude, any of the Starlink satellites that failed would naturally deorbit from the constellation due to atmospheric drag after 25 years, as per guidelines suggested by NASA and other space agencies.