Pratish Shah, General Manager USA
With the ever-evolving satellite technology requirements around communication, imaging, and processing capabilities and the increasing demand for commercial off-the-shelf (COTS) solutions, it is safe to say that space is the next frontier for commercial and defense needs. Although the space industry has come a long way, in some ways, it faces the same challenges as the military and defense industries. However, a fundamental distinction underlining the space industry is that “failure is not an option in space.” To state the obvious, when any hardware goes into space, it typically doesn’t come back. There’s no second chance, return merchandise authorization (RMA), or even an opportunity for a repair visit. Much like the insatiable need for high computing performance in harsh environments in the defense space, there is a growing need for reliable, rugged systems that are bound to perform in space without failure. Enter Aitech.

Having pioneered the “COTS in space” model, Aitech offers a mix of COTS (low cost, short schedule) products for rapid system development and custom hardware (reliability, radiation tolerance, speed, and environment) for enhanced capabilities and performance. As a long-time enabler to the military and aerospace market, Aitech provides reliable, rugged systems for aircraft, flight computers, guidance systems, unmanned vehicles, missile programs, and more. Drawing on its experience of providing the right technology to build the most advanced tactical systems in the defense industry, the company builds radiation-hardened systems that are suitable for the rigorous environment of space. “Just like in the mil-aero market, we offer critical, enabling technologies that provide the world with more communication bandwidth and wireless networking bandwidth, and higher resolution imaging and image processing, to help take mankind to the moon and beyond,” asserts Pratish Shah, General Manager USA of Aitech.

The three major product lines of the company include 3U CompactPCI single-board computer (SBC) and associated peripheral boards, the Ai-RIO modular, stand-alone communications C&DH computer as well as space electronics comprising space rated displays, communications and power management, and distribution modules. “We not only provide rugged (radiation hard) computer and electronic systems for space, but we were also one of the first companies to provide cost-effective computing solutions for space applications, based on components not specifically manufactured for space radiation environments,” states Shah. Since 2006, the company has delivered several generations of such ‘COTS’ products to the market, including NASA, CSA, and ESA. “Our extensive COTS hardware offerings allow us to support aggressive development-to-deployment schedules and provide proven, reliable embedded designs. Our flight experience and proven pedigree is unmatched. We have been producing space-compliant SBCs, power supplies, I/O boards, systems and more for decades. So customers have the confidence that our equipment is tested and verified,” he adds.

Shah explains that each space mission is unique, especially in regards to the necessary level of reliability, radiation tolerance, and mitigation of single event effects (SEE), such as single event upsets (SEU), single event latch-up (SEL), single event transient (SET) and other charged particle damage. These missions also entail a number of risks based on mission duration, orbit location and inclination, type of orbit, whether it’s manned or unmanned, and so forth. Aitech, to this end, has established itself as a trusted partner in risk mitigation strategies for many customers’ specific mission requirements by providing reliable systems and meeting radiation tolerance requirements.

Today, Aitech hardware and systems can be found in all earth orbits, from LEO to HEO, deep space missions, as well as in lunar projects. Since it was first put into orbit, the ISS has been home to more than 100 Aitech SBCs, all of which are still fully operational. A more recent program that demonstrates Aitech’s product space ruggedness is the use of an Aitech computer on OSIRIS-REx, which was launched in 2016, and rendezvoused with the Bennu asteroid to collect a sample of its surface in October 2020. It is planned to return the sample to earth around 2023.

Notably, Aitech offers a building block approach to its product solutions. “We were one of the first space product companies to have a catalog of electronics components from the commercial industry that were cost-effective and reliable for space applications.


That is a continued legacy on which we can build systems for the future,” says Shah. He highlights that space products have specific design priorities that must be addressed and managed from the start of the design cycle. Building an SBC that meets both the industry regulations and environmental needs of a space environment starts at the initial design but then follows through at every stage. The final result would be a large investment in a product that would have significant modifications to the original design. All of Aitech’s space products are intended for space from the product’s inception, which delivers a distinct advantage. The company ensures that all critical electronic parts and every integration on the board are stress tested and comply with strict NASA, CSA, ESA, and JAXA standards as applicable to ensure they are space worthy.

Although the company’s core development had been in SBCs, many of its customers now rely on it for complete systems composed of SBC, memory boards, I/O boards, and enclosures. Each of these components is part of Aitech’s COTS offerings. The company provides its unique a-la-carte option to allow customers to configure their system needs. By architecting a system through a combination of COTS boards, Aitech gives its space customers a very distinct ability to get a custom solution with the benefit of COTS offering. “We’ve always been very responsive to our customer needs for tailored products. This helps us evolve to build faster systems, leverage our large portfolio of mil-aero products by making them space worthy, and offer this at a price and speed that our customers desire,” states Shah.

Being at the forefront of handling the evolving market needs with decades of experience in the industry, Aitech is uniquely positioned to grow with the requirements of its customers. The company is already researching faster backplanes for its next-generation product line, which will include a new space-rated SBC and the associated peripherals. Not just this, Aitech is working with memory chip suppliers to provide a 1TB memory board using higher capacity, smaller form factor memory chips that will increase read/write speed and ensure that the memory boards reliably operate in space. “Moreover, we regularly meet with FPGA manufacturers and often design custom solutions for the latest FPGA products in the industry to help customers meet their in-orbit requirements,” states Shah.

Description
Having pioneered the “COTS in space” model, Aitech offers a mix of COTS (low cost, short schedule) products for rapid system development and custom hardware (reliability, radiation tolerance, speed, and environment) for enhanced capabilities and enhanced performance. As a long-time enabler to the military and aerospace market, Aitech provides reliable, rugged systems for aircraft, flight computers, guidance systems, unmanned vehicles, missile programs, and more. Since 2006, the company has delivered several generations of such ‘COTS’ products to the market, including NASA, CSA, and ESA 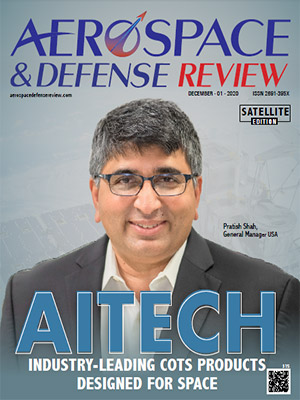 "We not only provide rugged (radiation hard) computer and electronic systems for space, but we were also one of the first companies to provide cost-effective computing solutions for space applications, based on components not specifically manufactured for space radiation environments"